I realize that a blog is meant to establish my brand. This realization comes late.  My original intention was simply to share my words and music. Turns out that you must have a presence on Instagram, Facebook, Twitter, and frequently say and show more of yourself than a prey animal would ever recommend. Brandishing my brand also means showing and reading my books:

. . . at book festivals in Petersburg 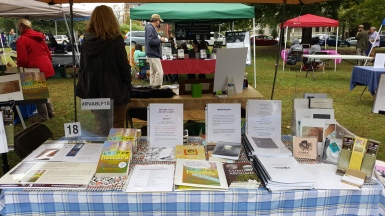 and then back in Richmond for the Virginia Writers Club Symposium and James River Writers Conference.  By the way, tonight (11/7/2018) I’ll be at an engagement at Stir Crazy Cafe on MacArthur Ave. in Richmond at 7 p.m.  It may later be broadcast on WRIR as part of the Prose&Cons program. Here’s an interview from that program that aired earlier in the year:

Election results are encouraging, but it remains to be seen whether folks can behave with civility and acknowledge that the public good is served through compassionate compromises.

Little gets said about actually attending to the magnitude and urgency of the socio-environmental issues of  climate, population, and industrialization.

It reminds me that the Blob is still frozen in the Arctic.

You know about the Blob, right?

The film documentary was made in 1958. We may not be concerned about climate science, but given that enough of Greenland and the Arctic have disappeared to encourage Russia to claim territory, shouldn’t we also be concerned about the return of the Blob?

This is supposed to be a rant, but like Emily’s complaints, it comes out slant–

Melting, and Other Slips of State

“How do you get people to protect themselves against something they don’t believe in?” and “I don’t think it can be killed, but at least we’ve got it stopped—as long as the Arctic stays cold.” —from The Blob, a movie in 1958

How do you get people to protect themselves

against something they don’t believe in?

A light’s required to see the Thing

against background light as the Thing is—

white on white, Malevich’s hand in it,

or Malewicz on Malevich, with Stalin’s hand.

White is the art. Arctic is its abstract grip

on cold ideals believed in

so much northern light conceals—

down, a dory tipped and emptied—the scene

in grating ice, the ship of state.

I like to bear down on existence and coexistence by setting thoughts into the compressed and spiny, sea-urchin-like multiple prickly references of a poem whose comprehension requires the reader to spend some time with it–maybe even diagramming a sentence or two. The rant’s there, but it isn’t breathless or venomous.

Instead, I put together the elements of the script-line from The Blob, the  art & politics of Malewicz, the effects of climate change, the analogy of how insistent self-delusion is like trying to see white on white or like being distracted by a personal light-show like the aurora borealis, and the comparison of the sinking dory to our denied slow-motion environmental disaster.

But this is the kind of problem poets set themselves.

Not a page-turner but a page-pauser.

A poem combines diverse elements to make a work that conveys an experience both in what it says and in how it says it.  In its completed gesture, it’s like a good meal or the musical experience from a pick-up group that brings everyone into the circle–like Barry Bless’s group at Crossroads Cafe on Friday mornings.

Or like a country that finds its strength in the trust and human treasures of all its people.